Our GAA Club Crest was designed by John Fitzgerald in 2001. It depicts the symbols of the ‘tree of the sign’ of Crecora  and the Abbey of Manister.

Crecora is derived from the Irish Craobh Chumhra, which can be translated as ‘the tree of the sign’. According to local tradition, a whitethorn bush was growing 300 yards north east of the old church. Pilgrims used to hang signs or tokens from the branches. The old church took its name from this bush.

An Mainistir means Monastery or Abbey. Turlough O’Brien, King of Munster, founded an Abbey of Cistercian monks in Manister in 1148. The ruins of the Abbey can be seen from Manister village. 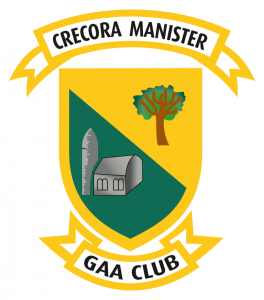