With the 1c and 2c copper coins being phased out the Crecora Manister GAA Fundraising Committee put a call out to pupils of Crecora NS to gather up coins, clear out coin jars and bring them to Crecora NS on Friday 15th January.

As an incentive and for some healthy competition a prize of a voucher for Smyths Toy Store was put on offer for those who collected the most coins.

Noel Murphy and Paul Foster attended Crecora NS on Friday 15th January, the collections of coins were gathered up. The weighing scales was brought out to determine the winners and in front of all the pupils the vouchers were presented to the following pupils for their great efforts:

See the photos below of these pupils receiving their vouchers.

A number of pupils had not collected coins or had not brought them in so a further date of Monday 29th February has been set where those children get a chance to win vouchers to Smyths Toy Store when Noel and Paul will return to the school and select winners based on those who collected the most coins.

Thanks to all the Pupils for their efforts. Thanks also to Catherine Tobin and all the teachers for their assistance with this novel fundraiser.

Things are shaping up nicely for 2016 , most of our coaches are in place , still room for more though if anyone is interested . Some coaches are making contact with players now regarding availability for 2016 so responses to phone calls and texts are much appreciated . More updates will be communicated in the coming weeks.

The Annual GAA Development draw will be kicking off again in the coming weeks. This is the biggest fundraiser for the club and with monthly prizes ranging from €13,000 to €250 , this is a great way to invest something into the club and hopefully get a return from your investment also. Crecora have had 7 winners over the last 12 months with prizes ranging from €10,000 to €250. Please expect members of the committee to call to your doors over the coming weeks looking for entries into this draw. The cost is €100 for the year and can be a one off payment or can be setup as a monthly Direct Debit .

Tickets are still for sale for the annual Croke Park National Club Draw. At €10 per ticket  with prizes including a Car, a trip with the all Stars,  All Ireland tickets etc. 100% of the €10 ticket price goes directly to our Club. Again this is a great way to support your club while being in with a chance to win something back. If you want tickets for this draw please contact any committee member or Paul Foster on 086 8500303

Following the success of the National Club Draw over the past two years, Croke Park have funded amazing prizes again for the 2016 Draw.

Tickets are on sale now for €10 and can be purchased from any of the Club Coaches or Committee Members or from Paul Foster on 086 8500 303.
The National Club Draw is a great opportunity for our Club to raise funds with 100% of the tickets sales being retained by our Club. 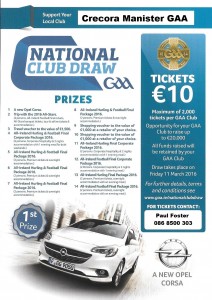