Our Minor Football team are playing Premier Football this year which is top level , and aided with our 3 members of the county panel we should be a match for any team we come up against.

Our first  Minor Football match is against Monaleen this coming Friday 2nd May at 7pm in Monaleen and all support is welcome.

Our Junior Hurlers will play Patrickswell in Crecora on Saturday 3rd May @ 6:30pm.
This was a hard fought game last year with some interesting refereeing decisions, so it should be a cracking game.

Crecora were quick out of the blocks and made a blistering start and continued to set the pace for the entire game with a passion and hunger for the game that was great to witness.

Early goals from Shane O’Connell and a good goal from Neil Heffernan settled the nerves and Crecora drove on with fine points from Shane O’Connell (6pts) Michael Bateman (1pt) and Conor Kirby (1pt).  Conor also gave a super pass into Shane to set up another goal for him to leave the Halftime score Crecora 3 : 08 Glenroe 03 points.

The lads took a few minutes to get going in the second half but then continued in the same vain as the first with a super individual goal from Cian Leahy and fantastic points from Karl Moloney, Mark Shanahan (3pts) and more from Conor, Michael (2pts),  Shane and Cian.

Our back line worked hard to make sure that scores were limited for Glenroe and big performances came from the Connolly brothers Tomas and Donnacha and the Shannahan brothers Mark and Tomas. Paraic O’Neill and Evan Keogh were solid in the backs and Jack Dalton and Richard Murphy did well when they came on

Yet another solid hurling performance from the Crecora lads  where again a quick scoring start was made with a fine point from Conor Kirby and added to with lovely point scores from Karl Moloney and Shane O’Connell which settled the team. Edwin Wixted scored 2 points from frees, Shane added another and Tomas Connolly scored a super point he worked so hard to get and his determination epitomized the spirit we have in this team.

Our back line worked hard allowing Knockainey only to score 2 points.

So the half time score was 7points to Crecora and 2 points to Knockainey.

Conor got a super point from almost the sideline after good work from Shane O’Connor and Cian Leahy soloed up from the backs to finish the scoring off with a well taken goal.

Special mention must be given to our younger players Richard Murphy, Donnacha Connolly and Shane O’Connor who really showed that they are a force to be reckoned with.

There is a break with matches now until the end of June due to the Junior Cert so let’s wish all the members of our team doing exams the best of luck and success.

Remember light training will continue during May and June check your texts for exact date and times.

Our second outing in the football this season was an easy victory with lovely football been played and some fine scores too.

It was more or less one way traffic but our defence dealt with any major treats that came from Castletown   with thanks to Karl Moloney, Tomas Connolly, Cian Leahy and Evan Keogh.

Our next outing in football is not until   Monday 30th June at 19:15 against Knockainey in Knockainey.

The break in games is due to the upcoming Junior Certificate exams so let’s wish all our players who are sitting the exam the very best of luck.

We had a great turn out tonight with 2 teams of 9 players playing 3 matches each.

The all weather facilities in UL were perfect for hurling, and our young players stuck to their task endeavouring to put their skills into practise under pressure.

This match practice is great for the players, they can see how they are improving and can spot areas where they could improve some more.

Check out the photo below to see our great young hurlers! 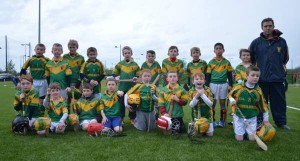