We are having a good run of luck with 2 more of our members winning prizes in the May draw of the Country Limerick GAA Club Draw.
Congratulations to Catherine Gilmartin on winning €500 and Eileen McCarthy on winning €250.

Our April winners were joined by family, friends and club members in Yellowtown Pub where they were presented with their cheques.
See the photographs below where Pauline Costello is presented with her cheque for €10,000 and Colm O’Byrne accepts a €500 cheque on behalf of his wife Greta.
Congratulations again Pauline and Greta!

On Friday 22nd May Crecora Manister hosted an under 10 hurling blitz.
The evening was perfect for hurling and young players took part from Claughaun, Monaleen, Kildimo and Crecora Manister.
From 6.30pm to 8.30pm over 90 young players played 3 matches each over 4 pitches.
It was very encouraging to see such engagement from the players with displays of a range of skills including ground hurling, rising and striking on the run and close up blocking and hooking.

At the end of the evening all players received a well earned juice drink and packet of crisps!
Thanks to all the Clubs who attended and their coaches for assisting with the running and refereeing of the games on the night. 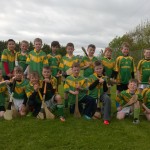 UNDER 14 FOOTBALLERS:
After the recent excitement of the Feile competition, it was on to Championship last week. Our first game was home to Adare who we had beaten in earlier Feile competition. Adare played with the aid of a slight breeze in the first half and were the first team to settle. They scored 2 points to give them an early lead.
We improved as the half went on and points from Darragh Foley and a free from Cathal O’Neill brought us back level. Adare added 2 more points to edge ahead again but 2 goals in quick succession by Cian Enright and Cathal O’Neill put us in the lead approaching half-time.
However we conceded 2 goals at the other end, one from a high ball and one from a penalty to leave us behind at Half-time on a scoreline of 2-4 to 2-2.
We started the second half determined to overcome the deficit and a goal by Darragh Foley after a cross-field pass by Sam Riordan restored our lead. Colin Coughlan added a goal and a point to extend our lead. We continued to press forward and further points from Colin, Cathal, Darragh and Jack Dalton pushed us further ahead. Adare added 2 points of their own and were awarded another penalty but John Bourke made a great save diving full length to keep the ball out to leave the final score of Kilpeacon 4-8 Adare 2-6.
Squad: John Bourke, Padraig Byrnes, Rory Hannon, Darragh O’Keefe, Eoghan O’Connor, Joshua Skehan-Fitzgerald, Colin Haigney, Colin Coughlan, Jack Dalton, Cian Enright, Cathal O’Neill, Chris Shanahan, Sam Riordan, James Conheady, Brendan Power, Richard Murphy, Fergal Egan, Philip O’Toole, Rian O’Byrne, Michael Maher, Patrick Dolphin, Killian Scanlon, Cillian O’Brien, Darragh Foley.
Our under 14s are out on Monday 18th in the football against Adare and then they make their first appearance in the hurling championship division 1 against Doon on Wednesday 20th.

JUNIORS:
Our Junior hurlers and footballers were both in league action this week. Our footballers drew with Ballybrown in a tough game in Clarina last Tuesday night and will go on now to meet the same opposition in the final.
Our Junior A hurlers were unlucky to lose out to Monaleen last Saturday 16th May by 1-11 to 1-10 at the Peafield Road. This was their first defeat of the league but still qualify for the semi finals.
They’re out again on Tuesday 19th May against Rathkeale in the All-County League while the Junior Bs play Patrickswell on Thursday .

TICKETS:
Limerick play Clare in first round hurling this coming Sunday May 24th at 4pm in Thurles, and in football on this Saturday 23rd in Ennis at 7pm. Tickets are available now at Centra and through the Club.
Prices: Senior Football Prices are as follows: General Admission: €15, Concession of €5 available at designated stile. U-16′s are free. Senior Hurling Prices are as follows: Covered Stand Adult: €25. Uncovered Stand Adult:€20. Terrace Adult: €15. U-16′s in all areas are €5.
Concession of €5 available at the designated stile for Student/OAP’s.

MANISTER NS SUCCESS:
Great win for Manister schools hurling team on Thursday 14th May in the South hurling final against Emly N.S.at Martinstown pitch. Played in ideal conditions this was a very enjoyable game with end to end hurling throughout the game. Down by four points at halftime Manister came back strong in the second half to win by 4 – 3 to 4 – 1 at the final whistle.
Many thanks to teachers/coaches Mr Lavin and Mr Browne for their great work over the last number of weeks and also to 4th and 5th classes and parents for great support on the day.
Team on the day was: Darragh O Keefe, Chris Shanahan, John O Donnell, Jack Duggan, David Burke, Thomas Lillis, Keane Costelloe, Jack McNamara, Isabelle Lyons and Ciara Browne.

BEST OF LUCK:
Crecora-Manister GAA club would like to wish both the Limerick hurlers and footballers the best of luck in their upcoming Munster Championship Quarter Finals against Clare this weekend.

We are delighted to inform you that O’Connell’s, Crecora Mills have generously sponsored a set of jerseys for our Junior Team.
John O’Connell of Crecora Mills has been a great supporter of our Club down through the years and it will be great to see our team line out with the name of such a fine local company on their jerseys.

In the photographs below you will see Shane Moloney our centre back, John Browne Club Treasurer, Paul O’Connell of Crecora Mills and Garbhan Sheehan our corner forward.

Read here some very interesting information about O’Connell’s Crecore Mills:
O’Connells, Crecora Mills is a leading animal feed company serving The Mid west and Munster. We deliver Quality Animal Feed to Limerick, Kerry, Cork, Tipperary, Clare, Galway and further afield. The story of this very successful Family run business started off many years ago.
John O’Connell started making animal feed in the early 1980’s as an attempt to diversify the family farm business in a time of Economic hardship.

Through a lot of hard work what started as a small enterprise buying, drying and selling local grain and selling chemicals grew into selling Rolled Barley, Wheat and Oats and soon grew into a full scale coarse ration animal feed mill.

As demand for John O’Connells Animal feed products grew and grew so did the Mill in Crecora with the addition of computer controlled mill and an automated bagging plant and palletiser. Over the next ten years John O’Connell Crecora Mills became renowned in the Mid west area for the supply of quality animal feed using the best ingredients.
With a growing demand in the Kerry area a site was purchased in Lissahane near Listowel for storing and drying grain and also as a shop and depot for the North Kerry region. This has become the Listowel branch of the company.
In the 1990’s and 2000’s the mill in Crecora was constantly improved and retrofitted with more modern mixing and storage facilities and a higher capacity bagging line was fitted to keep up with the increased demand resulting in a clean tidy state of the art facility where all products could ensure full traceability with ease.

In 2007 with the mill in Crecora working night and day and reaching its maximum capacity a second mill was bought in Castlemahon following the closure of Castlemahon Food products. The loss in employment in the area was stemmed to some extent by the purchase of the mill in Castlemahon and today 9 people are directly employed at the site along with many more indirectly.

This Castlemahon Mill is a state of the art modern pellet manufacturing facility which was them extensively reworked by the engineering staff at John O’Connells to also incorporate a 40 ton per hour coarse ration line using all the expertise and experience gained over the last 30 years.
Between the 2 facilities up to 5000 tons of raw materials can be stored to ensure that there is always an adequate supply and up to 800 tons of finished product can be stored ready for dispatch to customers.

The delivery fleet which started off 30 years ago with one second-hand truck now comprises 8 modern reliable trucks that are maintained to the highest standards fitted with high-speed bulk delivery systems.
All our Animal Feed products have full traceability, and are formulated with common sense and regard to Animal Nutrition needs as the year goes on. We are subject to regular Department of Agriculture Food and Fisheries inspections and have have always been ranked as among the cleanest animal feed mills in the country.
We also provide a nutritional advice service to our customers to help them grow their profits using our feeds. One of the reasons that the company has been so successful to date is the continued ethos that if we look after our customers by growing their profits then we will also benefit. “We only Mix with the Best!”