Congratulations to our Club Member Matt Ryan on his €500 win in the September Club Limerick Draw. Thanks for your support Matt.

See here for the full list of winners in the September 2017 Club Limerick Draw: 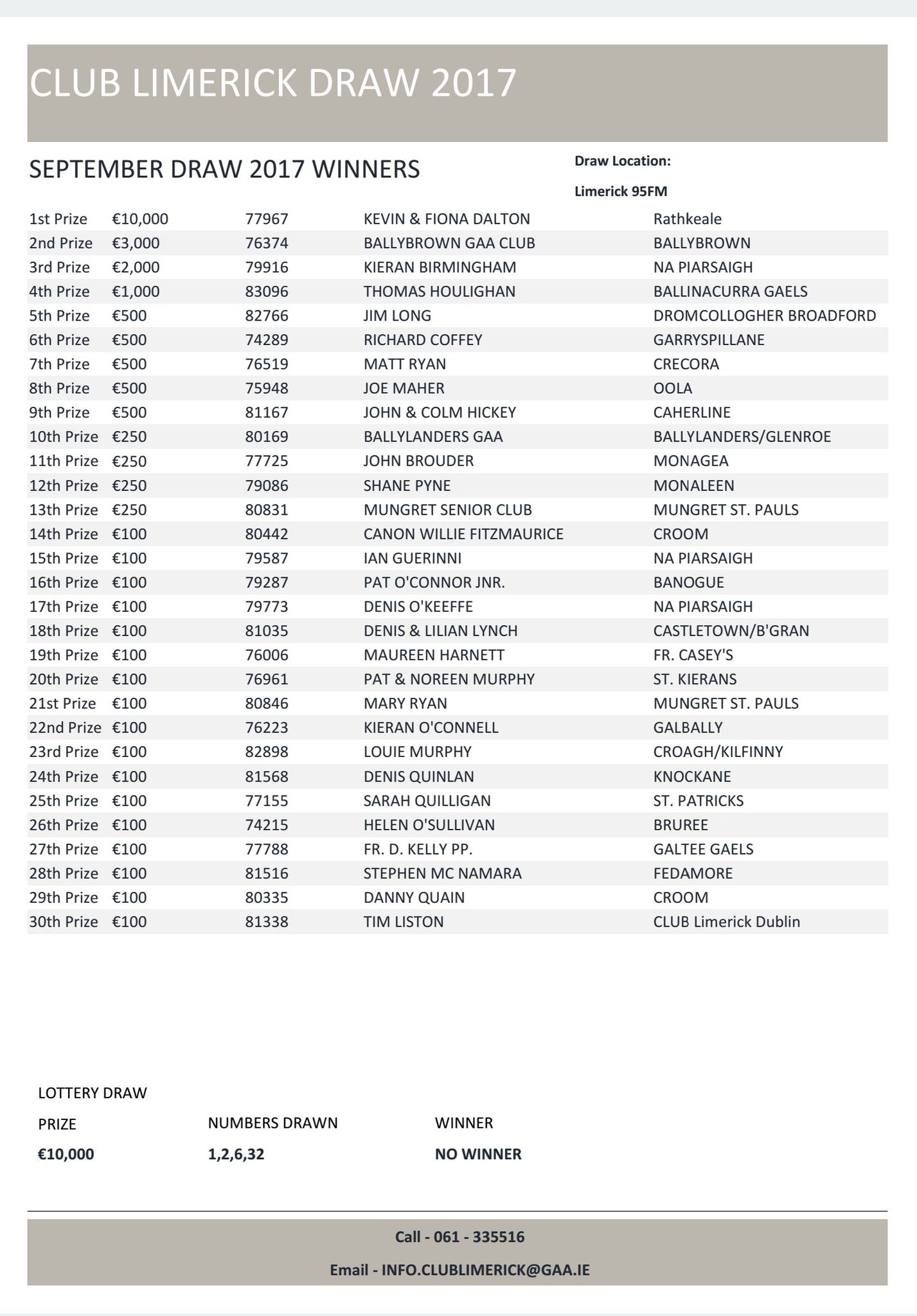 You can still join this draw and be in a chance to win one of the
30 CASH PRIZES PER MONTH
Star Car Prize in December
and Guaranteed Monthly Lotto Jack pot of €10,000
There are 10 draws in the year, cost to enter €10 per Draw, €100 per year. Payment by standing order is an option.

If you wish to join the Draw contact any one of the Club Committee or Coaches or contact us via this website: Contact Us
The Club Limerick Draw provides a valuable source of finance to all clubs. At least €50 of every membership goes directly to our Club, the balance supports Limerick Schools, Bord Na nÓg, Green & White Magazine & underage teams.
Thanks for all your Support.

The list of our Club Members who have won prizes in the Club Limerick Draw over the past years are listed under the Fundraising section of this website:  Development Draw Details

While we are nearing October there are still lots of GAA matches , Blitz’s , County Semi finals and finals to be played and most groups are still training .

Under 13 Hurling
Our U13 Hurlers are competing in the league at the moment. This is a step up for a lot of players from small pitches and goals to playing Full pitch , 15 a side games with official referee in a competitive environment . What we have seen from the first couple of games is that the players have the skills but are still getting to grips with the speed and movement and increased physicality of the competitive game. This is what the U13 league is for – to prepare the players for U14’s , give them a taster of what is ahead and also allow the coaches time to prepare and up the training intensity for the U14 Feile and championship games. The lads have a number of games remaining in both hurling and Football and your support of them would be greatly appreciated. Fixtures listed below.

Under 16 Hurling
Kilpeacon U16 hurlers will contest the Premier Division Shield Final on Saturday 23rd Sept at 1pm in Mick Neville Park , Rathkeale. There is huge promise in this team and panel of players who were very unlucky to miss out in the Cup Semi’s but are well deserving of their place in this final. Opponents in the sheild final are our near neighbours Mungret so there will be a little added intensity to the game as both clubs have a great friendly rivalry over the last number of years . It would be great to have a big support out in Rathkeale at 1pm for what promises to be a good , close game . We wish the players and management all the best and hope you can bring the trophy home with you.

Minor Football
Our Minor Footballers are looking forward to a county Semi Final against Caherconlish on the 7th Oct in Dooley park , Southliberties with a 2.30pm throw in. While numbers are tight at this age-group, we are playing as Crecora Manister and with our Minor County footballers Karl and Paul leading the charge hopefully the result will be a good one and another County Final in the reckoning . Again best of luck to all and with the match on so close to us it would again be great to get some support for the players and management at thisgame.

The adage that ‘sport can be cruel’  was never more applicable than to the Junior “A” City Final  last weekend when our footballers lost out to Kildimo / Pallaskenry by the  narrowest of margins. The game was played in challenging conditions,  with a strong breeze being a significant factor in the result.  With the aid of the elements in the first half, Crecora dominated proceedings and after 15 minutes lead by five points with scores from B.Hogan (0-2), Shane O’Connell (0-1), Mike  McCormack(0-1) and Karl Moloney (0-1).

In the run up to half time, Kildimo / Pallaskenry grew into the game with 3 points.   Gary O’Connell added a further brace but a number of missed opportunities  during this time would prove costly.

With a 7 points to 3 half time advantage, Crecora started the second half in superb fashion with three great scores from play from Karl  Moloney (0-1) and two from the inspired  Mark Shanahan. By the 45th minute, we held a commanding 10 points to 4 lead.  However, an unfortunate spell from the 45th to the 50th minute gave Kildimo / Pallaskenry  a lifeline and they scored two fortuitous goals to bring them right back into the game.

Despite the setback, Crecora responded in great fashion  with a point from Ian Donoghue and on the 58th minute Gary O’Connell raced through from the 45m line before being dragged down in the square.  Billy Hogan calmly slotted the resulting penalty, followed soon afterwards by another  free  which gave  us a two point advantage with time virtually up.

In the never-ending, extended injury time played,  disaster struck when Kildimo / Pallaskenry scored the winning goal after being allowed a  quickly taken free.  It was a cruel defeat after long periods of dominance and superb performance throughout from all players  and especially on the day from the influential  Mike McCormack, John Buckley, O’Connells, Moloneys and a masterclass  by Billy Hogan.

There is time now to recover and prepare for county quarter-final, well done to all involved. Final Score was 1-11 to 3-6.

The County Junior A Football Quarter Final is scheduled for Sunday 1st October at 12pm in Bruff against either Croom or Galtee Gaels.

Earlier this year we stressed that we needed to put a bigger push on the Adult Player to pay their Registration Fees. Thankfully more Adult Players have paid their Fees this year than in previous years.

This year we continue in our aim for 100% Player Registration.

If your name isn’t on the list and you provided your Registration Form and Fee to your coach prior to 15th September, contact Paul Foster on 0868500303

Registration in 4 easy steps:
1. Download the Registration Form
2. Fill it in
3. Put it in an envelope with the Registration Fee
4a. Post it to Paul Foster
4b. Alternatively you can hand the form & fee to your Coach at the next training session.
On receipt of the Form & Fee by Post Paul Foster will send you a text message to acknowledge receipt and will add you to the List of Registered Players