FÉILE TRIP:
Pride of place this week goes to our under 14 footballers who did so well in the National Féile na nGael finals in Wexford, Wicklow and Carlow last weekend. They departed from Crecora pitch on Friday morning having received countless messages of good luck and best wishes and headed for the first port of call, Rathnew in County Wicklow. The first game was played at 5pm on Friday evening against the home team Rathnew and defeat was our lot with a 3-7 to 2-4 loss. However our lads recovered quickly to defeat Tempo Maguires of Fermanagh an hour later by 6-2 to 2-8 also in Rathnew. Despie being eight points down at one stage in this game, our lads showed tremendous character to turn it around and win by six points. After that it was off to Gorey in County Wexford for the Féile parade and then on to Askamore for the night.
The lads were up at 11am the next morning, Saturday, as they met their hosts Askamore-Kilrush in Ballyroebuck and came out on top with 2-8 to 1-1 win. This was good enough to qualify for a quarter final meeting against Muinebheag, Bagenalstown of County Carlow. In the game played in Gorey at 3pm our lads were too strong for the Carlow side and won on a scoreline of 3-9 to 0-2. The lads returned to Askamore later on where the hosts had an evening of entertainment organised including a disco at the Askamore Community Hall.
The following day, Sunday, Kilpeacon met Carrick Sarsfields of County Longford in the All-Ireland Féile semi final at 11.50am. This was a tough, tight battle and our lads came out on top although just about on a scoreline of 2-6 to 2-4 in the grounds of Carlow Town hurling club. In a dramatic game, the Longford side missed two penalties in the closing minutes including a brilliant save by our keeper. When the final whistle blew, it was like an All-Ireland win and great celebrations followed.
Next up was an All-Ireland Football final, needless to say the first one ever experienced by the club, to be played in Netwach Doctor Cullen Park in Carlow Town at 2pm. Unfortunately, the Silverbridge Harps team from County Armagh were just too strong for our lads and beat us by 6-7 to 1-0. While the final may have been a disappointment, it was one hell of an achievement from the team to reach an All-Ireland final.
A massive thank you has to go to the host club of Askamore-Kilrush who looked after us in every way possible and we couldn’t have asked for better hosts. They even made the trip up to Carlow Town on the Sunday to support us in our semi final and final. We have made great friendships from our time in Askamore and hopefully we will see them in Crecora for a return visit in the not too distant future.
The lads can be so proud of their fantastic performances throughout the three days and surely they will leave the Southeast full of memories having had an experience they will never forget.

JUNIOR HURLERS:
Our Junior A hurlers prepared for the upcoming championship with two challenge games during the past week. Last Wednesday night they played Sixmilebridge in the Bridge while last Saturday the lads travelled to Tournafulla to take on the locals. Both these games were good exercises ahead of the first championship match against St. Patricks which takes place this coming Saturday 4th July at 7.30pm in Rathbane.

JUNIOR FOOTBALLERS:
Our Junior B footballers continue to train away ahead of the upcoming championship which is due to start over the next week against Ballybrown. Details below.

MINORS:
Our minor hurlers and footballers are back training after the Leaving Cert break and they will return to their championship games over the next few weeks.

UNDER 16s:
Our under 16 hurlers and footballers are returning to action this week and next after the Junior Cert break. The hurlers play St Kierans this Tuesday 30th June at 7 in Crecora while the footballers are out next Monday 6th July against Askeaton-Ballysteen also in Crecora at 7.15pm.

UNDER 14s:
After the highs of Féile last weekend, its back to business for our under 14 footballers next week when they meet Kildimo-Pallaskenry next Wednesday 8th July while the hurlers are out a week later against Na Piarsaigh.

CÚL CAMP:
The GAA Cúl camp will be held this week from Tuesday 30th June to Friday 3rd July in the pitch. This will take place after school from 12.30-4.30 on Tuesday and from 10-2 Wednesday to Friday. Thank you to everyone who has volunteered to coach and help out over the week. Hopefully this will be an enjoyable camp for both children and trainers.

Kilpeacon GAA have completed their journey to Wexford as Limerick representatives in the National Feile Peil 2015 U14 competition.

We began our journey on Friday morning heading to Wicklow / Wexford and Carlow . With a stop on the way for lunch and a light kick about at Naas GAA we headed for Rathnew in Wicklow to play the hosts in our first game .

On a very warm afternoon the first half was a close affair with Rathnew ahead by 3 points at Half Time . We started the second half well and went into the lead early on but 2 quick goals by Rathnew sealed the game for them in a very sporting game between 2 evenly matched teams.

Our second game was against Fermanagh kingpins Tempo McGuires and again we were slow to start with Tempo definitely on top at half time with a 6 point lead however after the break the Kilpeacon team shifted a couple of gears and in a 10 min spell rattled the net 5 times to deservedly win the game on a scoreline of 6 – 2 to 2 – 8 .

Following this game we headed down to Gorey to march along with 40 other teams in the Feile parade and then we headed to our host club Kilrush-Askamore for the evening.

Saturday mornings game V Kilrush Askamore would decide which of us would compete in the Cup quarter finals or the shield competition . The first half was a nervous affair with only 2 points separating the teams at half time however once again Kilpeacon kicked on and closed out the game with some great scores including a fine point from Fergal Egan to win on a scoreline of 2 – 8 to 1 – 1 .

This guaranteed us a Cup quarter final game which we later found out would be against Mhuine Bheag (Bagnelstown) on Saturday afternoon. We were now in knockout competition so could not afford any slip-ups and we began the game with gusto and belief and had 3 – 3 to 0 – 1 on the board at half time however we would face a strong breeze in the second half and were now playing high quality teams and Mhuine Bheag definitely threw everything at us for the second half however out players showed some real determination with our backs in fine form and held out on a scoreline of 3 – 9 to 0 – 2 .

We had now reached our aim which was to be playing on the final day in Feile and a Semi Final awaited us on Sunday morning . Our opponents turned out to be Carrick Sarsfields from Longford and this team had some very big wins under their belts all through their group stages so we were under no illusions about this game , it was going to be one tough dog fight and our guys knew they had to leave everything out on the field . Carrick took a very early lead right from the throw in with a great individual effort and rattled the net however Kilpeacon came back with 2 goals and a point and despite Carrick being rewarded with 3 penalties in the second half , one right at the end to win the game , a fabulous save by Sam Riordan maintained our 2 point lead and the final whistle saw scenes of sheer delight putting us into the Cup final in the afternoon. Our players had left body and soul on the field of play and with a 1 hour turn around to the final it was always going to be a difficult one .

We came up against a very strong Armagh team played in Dr Cullen park in Carlow , Silverbridge , and despite once again putting everything into the game Kilpeacon came up short in the final.

Every credit must be given to this great panel of players and coaches for the heart , determination and belief they showed during a wonderful weekend of Football , this is what memories are made of and Kilpeacon represented their club and county with great honour and pride and I’m sure we will see much more from this group of players in the years to come.

if you have some photographs from the weekend send them to photos@crecoramanistergaa.com and we’ll add them here:

Lookin' good in the Feile gear

Ready to hit the road for Wexford

Warm up session in Naas

A great welcome from our host club Kilrush Askamore

Crecora Manister GAA will be running our Annual Camp on the first week of the School Summer holidays , School closes on a half day Tuesday 30th June

Please feel free to  complete the form and give it along with the fee to one of the coaches before the Camp or on the first day of the Camp: REGISTRATION KELLOGGS SUMMER CAMP 2015

Kelloggs Gear
This year the Kelloggs Gear will not include Shorts and Socks, instead a half zipped top will accompany the jersey and gear bag. 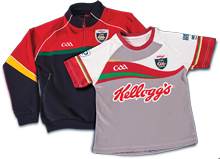 FÉILE TRIP:
On Friday 26th June, our under 14 footballers will travel to Wexford to partake in the Féile Peil na nÓg All Ireland finals. They are in division 7 of this competition and are in a group with Askamore-Kilrush of Wexford, Rathnew of Wicklow and Tempo Maguires of Fermanagh.
On Friday evening they will play Rathnew in Rathnew at 5pm and then Tempo at the same venue at 6pm. They will then travel to Gorey to march in the Feile parade before going to Askamore for the night.
On Saturday morning they will meet Askamore-Kilrush at their home pitch in Ballyroebuck at 11am. Depending on how they get on, they could be in a semi final on Saturday evening or a final on Sunday. They will travel home on Sunday evening.
The club would like to wish them the best of success and hopefully they will enjoy this once in a lifetime experience.

COMISERATIONS:
Comiserations to the Limerick Senior Hurling team who were beaten last Sunday by Tipperary in the Gaelic Grounds in the Munster semi final. They will now go into round 1 of the qualifiers where they will play Westmeath in Mullingar on the weekend of the 4th/5th July.
Congratulations though to the Limerick Intermediate Hurlers and Senior Camogie team who recorded championship wins over Tipperary and Offaly respectively.

THANK YOU:
Thanks to all who turned out to support the recent Féile quiz fundraiser in Fedamore community hall. An enjoyable night was had by all.
Congratulations to the winning team of Pat, Carmel and Róisín Quirke and John and Isobel Cregan.

PLAYER REGISTRATION FEES:
The club would like to ask all those who have yet to pay their registration fees to do so as soon as possible. These fees are one of the main sources of income for the running of the club and your support would be greatly appreciated.