UNDER 21 Hurlers
Our under 21 hurlers played the second round of the City championship against Southside Gaels (Claughaun & Old Christians).in Crecora on Saturday 24th February. Despite a battling first half display, Southside proved too strong in the second half and eventually ran out 3-21 to 1-8 winners.

Next up for our lads is a city ‘B’ final against Ballybrown next weekend with time, date and venue to be confirmed.

UNDER 14
Our under 14 team were narrowly beaten by Patrickswell in the opening round of the county Féile na nGael on a scoreline of 1-2 to 0-2. This is a young team that will now focus their attention on the league and championship.

Our U14 football team had a great 1 point win against a fancied Claughan team in the opening round of Péil na nÓg on Sunday 25th February. Throughout the game there was no more than a score between the teams and in the last 5 minutes the lead changed 3 or 4 times. They showed great heart to see the game out and set up a quarter final game against Ahane. Best of luck to the team and mentors in the next round.

HARTY CUP
Congratulations to our own Cathal O’Neill who was a member of the victorious Ardscoil Rís team who defeated Midleton CBS by 3-18 to 2-10 in the final. Cathal contributed 1-3 to the winning tally and he and his teammates will look forward to an All-Ireland semi-final on the 19th March with the opposition still unknown as of yet.

Our older teams are back training for the past few weeks with matches already played at U14 to U21 grades.

Players are requested to pay their Annual Registration Fee to their Coaches over the coming weeks.

To make it more convenient you can now pay your Annual Registration Fees using the new Official GAA App. Players who previously registered with Crecora Manister GAA will receive an official email similar to the one below. Download the GAA App, log in using your Access Code and pay your Reigstration Fee. 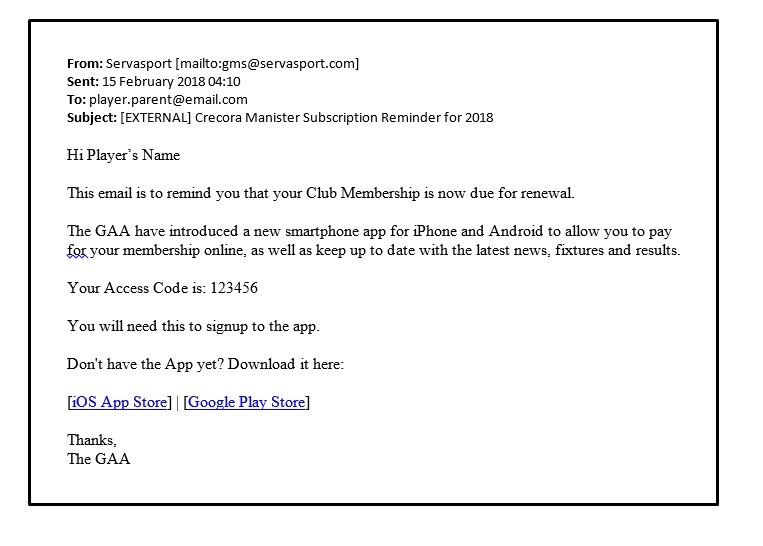 It is that time of the year again where we ask for your support through the purchase of a ticket in the Club Limerick Draw.

Tickets costs €10 per each of the 10 draws, with the first draw at the end of March.  As a club this is a huge source of funds for us with at least 50% of each ticket sold going to our Club.

We have received great support over the years with many of our club members, supporters and community purchasing tickets.

Our members have had their share of good luck with 21 winners sharing almost €40,000 in prizes over the past 3 years.

For more details about the CLUB Limerick Draw click here

To see our Winners from Previous years check out page

Thank you for your continued Support