On Saturday 8th February a Celebration night was held in the South Court Hotel to mark the successes of the Kilpeacon Minors in winning  three trophies in 2013. This feat was achieved across both codes, with the City Hurling title added to the double of City and County Football titles won earlier in the season.

Most players were on both squads and the successes were an acknowledgement of their commitment throughout the year. This was also a great example of two GAA clubs who were short of numbers at this age group coming together to achieve mutual success as the Kilpeacon amalgamation of Crecora Manister & Fedamore at Minor level achieved these excellent results in its inaugural year.

The hugely popular guest of honour on the night, Limerick hurler Paul Browne, spoke of the importance of his GAA Club to his career and urged the players to stay together and develop further.

Each player was presented with their Medals, Kilpeacon Gear Bags and commemorative tops. The Coaches received commemorative Kilpeacon tops in recognition of their valuable contribution during the long year.

Noel Murphy in his dual role as event organizer and compére thanked all those who attended for their continued support and the South Court for the well prepared venue.

A highlight of the night were the “archives” which featured  photos and videos of the Minor players from Under 9 up to the present day.

Check out some photos from the night 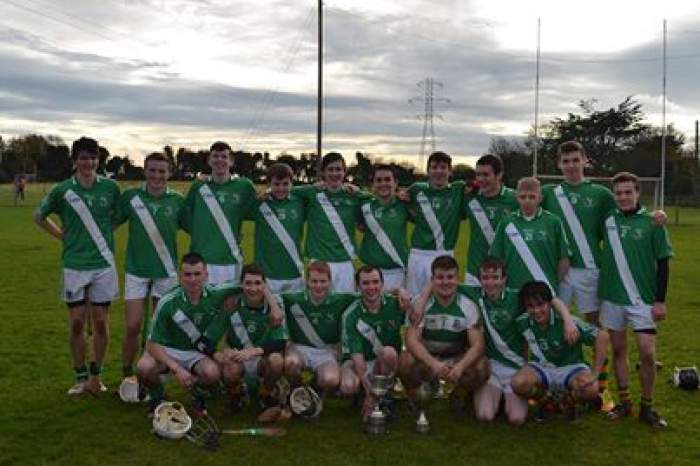 In 2013, the amalgamation at Minor grade of Crecora Manister with Fedamore under the team name Kilpeacon proved to be an amazing success in both Hurling and Football.

The Hurling City final win, together with the double of City & County Football titles, brings the Kilpeacon Minor’s silverware to 3 cups for the season, which is an unprecedented result in the first season of an amalgamation.

A night out has been arranged to celebrate this success and to recognize the great time and effort from the players and coaches from both clubs.

A donation box will be at the entrance door should you wish to give something to cover the costs of the night.

Please come along as this will be a great opportunity to meet the players and members from our GAA Clubs and our communities.

Minor Football
After a very segmented season which saw four games played over a six month period our minor hurlers were back in action this week with two games in the space of five days. First up was the City Final versus Cappamore. In the group phase earlier in the season, the corresponding tie ended all square and lighting stroke again as this final also finished in a draw. Despite the early setback of conceding an early goal, we regained composure and well taken scores by Liam Carey (1.2) and points by Craig McNamara,Micheál O’Neill and man of the match Damien Kearney left the sides level at half time. The second half was a tit-for-tat battle where we had great points from Liam Quirke and L.Carey and a brace from both M.O’Neill and Cormac Flanagan. Conor Burke also contributed two well struck points with the last crucial one from a 50 m. free to tie the match at 1.13 apiece. Overall it was an excellent team performance especially from our defense who limited Cappamore to 3 points from play. The fixture also marked the welcomed return in goal of the reliable Killian Rea.

The county semi-final proved a step too far for our minors hurlers who suffered a four point defeat to Tournafoula. The exertions of the previous week took their toll as we understandably could not reach the heights seen in the football county final and city hurling final just days before. We started brightly with a Cormac Flanagan point from play and despite conceding points we had a prompt response when Craig McNamara goaled and further points were added by Liam Quirke and two from Conor Burke leaving us trailing by two at the interval 1.4 to 0.9. Despite adding a further 1.3 in the second half through C.Burke, Liam Carey, Michaél O’Neill and a Damien Kearney goal we could not regain the lead. Two late goal attempts by Gary O’Connell and D.Kearney were not to be and we bowed out of the county championship.

As captain Nicky Morrissey declared after the game it has been a fantastic season for the minors with two football titles and a city hurling final replay to come. It has taken great commitment from basically the same cohort of players to achieve this success. Well done and thank you to all players involved from the coaching staff.

Minor Football – County Champions!
Within one year of their inception, Kilpeacon minor footballers are County Minor Football B champions following an emphatic win over a fancied Glennacurrane on Saturday last in Martinstown. Despite the heavy rain that persisted throughout the first half, both sides produced good quality free flowing football. Kilpeacon settled quickly with Cormac Flanagan causing havoc to the opposition’s full back line and Micheál O’Neill and Craig McNamara taking good scores. A well taken goal by Craig McNamara help set the tone for the game and a lead we would never relinquish. Glennacurrane kept in touch with some good points from play but a masterful display of disciplined defending in the full back line by the Evan and Tim Moloney and Colm Carey never presented them a sniff at goal which was ably guarded by the reassuring presence of Eoin Enright. Further points by powerful Damien Kearney and three by the resurgent Micheál O’Neill gave us a 1.6 to 0.4 half time advantage. The open spaces of Martinstown allowed David Cregan to use his pace to a great extend in both defense and attack and the work-rate and play making skills of Gary O’Connell were a joy to behold.

Fears of a comeback were eased after five minutes of the second half when Seán Fitzgerald showed his vision and versatility at full forward and set-up Damien Kearney for a cracking goal. At this stage David Macken and C. Flanagan were dominant at midfield and David got reward for his great work with a sweetly taken point. Further points were added by Craig McNamara (2) and Damien Kearney. Glennacurrane continued to battle with their strong midfield axes and and never gave up and it required a great defensive effort by out half backs the combative Nicky Morrissey, the commanding Conor Burke and the ever consistent Liam Carey to keep them at bay. When introduced, Liam Quirke reveled in the open spaces and scored a wonderful solo goal. Late Glencurrane pressure was rewarded with a goal and reflected their never say die spirit. Our late substitutes David Butler, Tom Keogh and Conor and Daragh Griffin helped us helped us safely over the finish line on the scoreline 3.9 to 1.6.

The game brought an end to an excellent football season for our minors. Well done to every panel member who has played a role in achieving both city and county honours for the club. For those involved in minor hurling the pursuit continues.